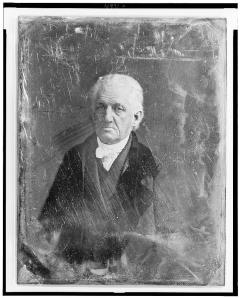 This is part three in a series recounting the history of drinking in America leading up to Prohibition.  While we hear a lot about the consumption of alcohol during Prohibition, seldom discussed is the importance of alcohol (and its consumption) at earlier dates in American history.  This research was very interesting and I hope you enjoy it!

While social historians point to the Jacksonian age as an influence on drinking – the messages self reliance, masculinity and rugged individualism seemed tailor made for  the hard drinker and distiller – drinking in America was also buoyed by European immigration and the growth of cities in pre-Civil War America.  From 1830 to 1860 two million Irish immigrated to the United States, bringing with them a culture of drinking and public house frequenting.[1]  Escaping political persecution and famine, these Irish settled mostly in busy Northern urban centers.  They often faced discrimination (both racial and religious due to their Catholicism), abject poverty, and dangerous factory work.  In an effort to connect their communities and escape their difficult living conditions, Irish men bonded together through social gatherings and drinking Irish whiskey.  “Faced with an openly hostile environment, and both unable and unwilling to Americanize, the immigrants seized upon drinking as a major symbol of ethnic loyalty.  That is they drank hard to assert their Irishness.”[2]  Visiting the public house for a drinking session also served another purpose.  By congregating among themselves, the Irish used the pub as a way to keep off the streets and out of trouble.  This cause was supported by Irish American leaders, who could use these visits to organize politically and pass out free drinks to elicit support.  While the Irish pub served its political purposes well (in cities like Boston, Chicago, and New York the Irish would wield considerable clout) )rter) it also lead to higher rates of inebriation and the pervasive stereotype of the ‘drunken Irishman’,

END_OF_DOCUMENT_TOKEN_TO_BE_REPLACED

A “woodcut” used by the Harrison/Tyler campaign in 1840.

This is part two in a series recounting the history of drinking in America leading up to Prohibition.  While we hear a lot about the consumption of alcohol during Prohibition, seldom discussed is the importance of alcohol (and its consumption) at earlier dates in American history.  This research was very interesting and I hope you enjoy it!  Read part one here.

Concerns about the wide spread use of alcohol in young America started taking form in religious circles.  Methodists and Quakers warned parishioners of the dangers of hard liquor to social order.  The Quaker Anthony Benezet, who founded the first anti-slavery society on the American Continent, called alcohol “The Great Destroyer” and warned of the medical and social problems associated with excessive drinking in a 1774 pamphlet .[1]  While many religious organizations saw nothing wrong with alcohol, stigma was attached to drinking too much. While moderate drinking was accepted, heavy drinking began to be regarded as a sin.

The most influential figure in the early temperance movement was Dr. Benjamin Rush, who served as Surgeon General of the Continental Army and was one of the signers of the Declaration of Independence.  In 1784, Dr. Rush published An Inquiry into the Effects of Spirituous Liquors upon the Human Body, and Their Influence upon the Happiness of Society.  In his pamphlet, Rush broke new ground, becoming one of the earliest people in the medical field to suggest that liquor broke down the body and helped produce both mental and physical illness.  Of equal concern, was Rush’s opinion that the continual drinking of liquor would result in the dissolution of government and the collective American spirit.  Rush called for government limitations on drink asking, “Should the customs of civilized life, preserve our nation for extinction, and, even from an increase of mortality, by these liquors; they cannot prevent our country being governed by men, chosen by intemperate and corrupted voters?”[2] Despite his condemnation of liquor, Rush did not admonish the drinking of all alcoholic beverages.  Whereas Rush believed hard liquors like rum, liquor, and gin were evil and Antifederal, he supported the consumption of cider and beer as “invaluable FEDERAL liquors’ which promoted cheerfulness and political stability.”[3]
END_OF_DOCUMENT_TOKEN_TO_BE_REPLACED

This is part one in a series recounting the history of drinking in America leading up to Prohibition.  While we hear a lot about the consumption of alcohol during Prohibition, seldom discussed is the importance of alcohol (and its consumption) at earlier dates in American history.  This research was very interesting and I hope you enjoy it!

The creation and consumption of alcohol has played an important and notable role in American life and politics.  In colonial America, the consumption and production of alcohol was a large part of daily life – dominating politics, economics, and social life.  The framers celebrated the completion of the Constitution with drink, and saloons served as political meeting places during the Jacksonian Era.  The production, sale, and consumption of alcohol in America was not without controversy.  While alcohol was celebrated by many, others believed it negatively impacted society.

The American passion and desire for drink is as old as the colonies themselves.  On the Mayflower, pilgrims drank barrel after barrel of beer, for a multitude of reasons.  Unlike water, beer could be barreled and kept at sea without spoiling.  In addition, prevailing ideas about alcohol in the Seventeenth Century lead many Europeans to drink for health reasons.  “A stiff drink warmed a person on cold nights and kept off chills and fevers; a few glasses made hard work easier to bear, aided digestion, and in general helped sustain constitution.  Abstinence invited trouble.”[1]
END_OF_DOCUMENT_TOKEN_TO_BE_REPLACED

I would like to take the time out to thank all of you who have taken the time to read my articles and wish you all a fantastic holiday.  While most of you know that today was the day the Continental Congress adopted the Declaration of Independence on 1776, I would like to share some interesting tidbits about July 4th.

1776 – Despite the fact that American Independence is celebrated on July 4th, John Adams thought that future generations would celebrate on July 2nd – the date the Continental Congress voted to sever its ties with Great Britain.  In a letter to his wife, Abigal, he wrote:   “The Second Day of July 1776 will be the most memorable Epocha, in the History of America.” END_OF_DOCUMENT_TOKEN_TO_BE_REPLACED

June 19, 2013 was the 167th anniversary of the first organized and recorded baseball game (1846) as well as Lou Gehrig’s 110th birthday.  As a celebration of these events, I will be publishing posts that analyze the importance of Baseball and Lou Gehrig in particular on American Culture.  Please Read Part One Here.

The Hall of Fame Plaque of Henry Chadwick, baseball’s iconic promoter and first beat writer who was instrumental in creating the statistics and record keeping still used in today’s game. (Source: http://baseballhall.org/hof/chadwick-henry).

While the NABBP suffered in organization and attendance during the Civil War, the end of hostilities resulted in baseball being more popular than ever.  Many veterans, most notably Hall of Fame Member and first National League President Morgan G. Bulkeley, would advance the promotion and organization of both professional leagues and interest in baseball in the decades following the Civil War.  Notable clubs continued barnstorming tours throughout the United States.  On September 6, 1867, the Walla Walla Statesman advertised a game between a local club and the Brooklyn Excelsiors. “”The Excelsiors having challenged the Walla Wallas to play a match game of baseball, the challenge has been accepted and the game will come off at the ball grounds to-morrow …Clubs will bring out their crack players, and hence an interesting game may be expected.”[1]    More than 259 miles away, the Vancouver register noted “Base ball mania” had reached its African American townspeople who were buying equipment at a local town stores.[2]  Traveling clubs from the north east as well as soldiers returning to the west and south spread the popularity of baseball beyond its pre-Civil War market.  This spread helped reduce the class and race barriers that existed in the early years of baseball, thereby allowing a wide variety of Americans to enjoy the game.  At Vassar College, women formed baseball clubs, encouraging other colleges to follow suit with women’s teams.  In 1867, the Dolly Vardens of Philadelphia were formed with a membership consisting entirely of African American women.

With the return of peace the popularity of baseball soared.  The Arizona Weekly Miner reported games being played by mining teams throughout the state on immigrant heavy baseball teams.  In 1868, historian Jules Tygiel estimates 200,000 baseball enthusiasts had attended a baseball game.[3] Books such as Beadle’s Dime Base-Ball Player and children’s fiction Changing Base were popular.  Americans were following, discussing, and reading about baseball like never before. Commenting on the era, the Chicago Tribune would call the post civil war era “the arrival of the age of baseball,” a sentiment which was shared by publications throughout America.[4]
END_OF_DOCUMENT_TOKEN_TO_BE_REPLACED

June 19, 2013 is the 167th anniversary of the first organized and recorded baseball game (1846) as well as Lou Gehrig’s 110th birthday.  Over the next few days, I will be publishing posts that analyze the importance of Baseball and Lou Gehrig in particular on American Culture.  This is Part One.

In 1845, a group of middle class New Yorkers known as the Knickerbockers began organizing and standardizing the rules to a sport that would become baseball.  Shortly thereafter, amateur baseball clubs and organization sprang up around the greater New York area.  The outbreak of the Civil War and troop movements furthered the spread of the game, and by the 1870s professional teams and organizations were promoting baseball as a spectator sport.

As baseball spread in popularity, the game itself became a representation of American values.  Promoters of the sport hailed it as a democratic institution[1] where players act “like a gentleman on all occasions” never taking “an ungenerous advantage of his opponents.”[2]  Baseball’s sensibility and reputation was opined by enthusiasts as uniquely American, and immigrants soon adopted the game through acculturation.  Its impact was felt across both class and racial lines (although leagues segregated very early on to reflect the sensibilities of society) as the sport spread through the stadiums and sandlots of America.

In times of both calm and crisis the American public has turned to baseball for entertainment.  Its star players have become household names, and baseball’s imagery and language has become part of our national culture.   American biographer Gerald Early once remarked, “I enjoy the game… principally because it makes me feel American.  And I think there are only three things that America will be known for 2,000 yeas from now… the Constitution, jazz music, and baseball.”[3]  While baseball’s rules and scope have changed over the years, its cultural impact has remanded a constant.

Long before baseball became an organized sport in the 19th century, ball and bat games were played throughout the American Colonies. As early as 1773, Southern African Americans began playing ball games on Sundays, although participation in such games could lead to punishment.[4]  More commonly played in the North however, these games, referred to as “trap,” “townball,” or “base,” were largely informal with rules that varied depending on where they were played.   Teams usually played on a square field and all batted balls were considered in play (even balls that went backward).  The English game of Cricket was also frequently played in the United States throughout the Nineteenth Century.  While baseball has many similarities to cricket, early baseball has much more in common with the aforementioned games.  However, many of the skills transferred between both games, and often skilled players could excel at both.  Historical drawings and accounts show these games continued throughout the 18th and 19th Centuries.
END_OF_DOCUMENT_TOKEN_TO_BE_REPLACED