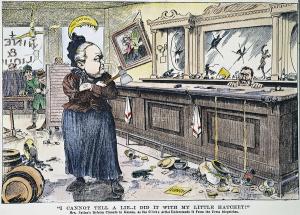 A political cartoon featuring radical prohibitionist Carrie Nation, known for smashing up saloons with her hatchet.

This is part four in a series recounting the history of drinking in America leading up to Prohibition.  While we hear a lot about the consumption of alcohol during Prohibition, seldom discussed is the importance of alcohol (and its consumption) at earlier dates in American history.  This research was very interesting and I hope you enjoy it!

The WCTU was inspired by a prominent doctor’s lectures on the dangers of alcohol.  After the lecture, women in New York and Ohio staged pray-ins and silent protests at various saloons in an effort to drive liquor out of their communities.  As the movement spread, their actions drove liquor out of 250 communities.[1]  Later that year, the WCTU was officially formed and held a national convention with the slogan “For the God and Home and Native Land.”  The WCTU’s interests were two fold – to eradicate drinking and to promote women’s rights and equality.  Behind the idea of protecting the home and improving society, the WCTU quickly became the largest woman’s group in the world.  At the time, women had little rights in America, even in cases of rape and spousal abuse.[2]  For the WCTU, the rights of women, protection of the family, and the evils of liquor went hand in hand.  “Women and children had often been victimized by drunken men; and the saloons where men had gathered were …vicious, corrupt dens.”[3]  The WCTU linked tobacco and alcohol use to problems with prostitution, labor, and various public health issues as well.  Selling women as ‘home protectors,’ the WCTU’s membership grew from 149,527 in 1890 and over 248,343 in 1910.[4]

Championing public education, the WCTU pressured government officials that alcohol education should be mandatory in schools.  By the end of the Nineteenth Century, prohibitionist propaganda became standard in most state school curriculum – as children read leaflets and recited poems about the dangers of drinking.  The WCTU felt that by targeting young children early they could prevent them from experiencing the same alcohol problem of their fathers in the future.  Much of the school prohibition education was accompanied by heavy religious overtones.  Josiah Strong, a protestant minister , who spoke and wrote on the social ills of the Nineteenth Century, felt “schools have no alternative but to act as an arm of Protestant churches because immorality is perilous to the State and morality cannot be secured without the sanction of religion.”[5]  Parochial schools and German language Lutheran schools began popping up to serve groups who did not have the same beliefs as the social reformers.  In response, nativists (who often were loosely affiliated with various prohibition and temperance movements) sought to demand English only education and supervision of catholic schools in states with significantly large Catholics and/or German immigrant populations.[6]

The Economy of the Nineteenth Century was a violently fluctuating one which did not favor the lower classes.  More and more jobs became industrial and demanded urban workers, who often worked for little pay – leaving many urban dwellers feeling improvised and hopeless.   To deal with their sorrows, many people of the urban class turned to alcohol and drank frequently.  By the end of the Twentieth Century, alcohol abuse was estimated to be the direct cause of 20 percent of urban poverty.[7] ‘Skid Rows’ – bad areas of town full of low rent slums, homeless alcoholics, and seedy bars – popped up throughout cities in the United States.  Since the economy experienced several recessions in the later half of the Nineteenth Century, high unemployment lead to a large transient population which usually centered around urban skid rows.  The “skid row bum” became a propaganda stereotype for the dangers of alcoholism.

Skid row was a large concern for the WCTU and other groups, but their chief focus was the urban saloon.  In the late Nineteenth and early Twentieth Century many saloons served “as centers of drunkenness, crime, profanity, prostitution, gambling, and political corruption.”[8]  Political machines were run out bars (which often doubled as polling places) and allegations of ballot stuffing, bribery, and intimidation were rampant.  To the religiously affiliated temperance groups, the saloon was the center of sin and provided a startling contrast to the virtue, cleanliness, and conservatism they advocated.   The saloons and their inhabitants represented the personification of evil to WCTU and other groups.

The urban saloon had an inherently negative image to the every day citizen. “Parents warned their children to steer clear of bars, and young women were known to cross streets or detour for blocks to avoid walking past tavern entrances.”[9]  The Saloon was a main target of temperance propaganda as well.  A temperance song called the “Anti-Saloon Battle Hymn” alleged saloons created “millions of widows and orphans” and labeled it an “unspeakable monster.”[10]   Nonetheless, saloons continued to attract a steady stream of customers.  Saloons regularly offered “free lunches” (which were often salty to encourage drinking) to patrons in order to attract them inside.  Political treating enticed patrons with free drinks.  However, the actions of these saloons only reinforced the evils that temperance groups warned about, causing an increasing number of people to join their cause.  As more people were drawn to temperance societies in the last decade of the Nineteenth century many groups’ goals began to shift.  “Temperance ideology began to shift away from its broad reformist orientation toward a single-minded concern with Prohibition.”[11]  Liquor and those who served it became the enemy that destroyed the economy, families, and corrupted the country, and had to be eradicated to save America.

2 thoughts on “History of Drinking in America: Part Four”