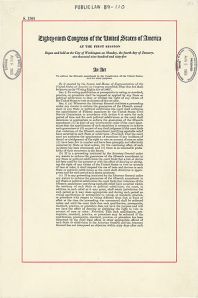 On June 25, 2013, the Supreme Court issued a 5-4 decision in the case Shelby County v. Holder that had broad implications involving The Voting Rights Act of 1965 (referred to as the VRA).  The VRA was enacted by the United States Congress due to discriminatory acts that were conducted throughout the South including literacy tests.  These tests (as well as poll taxes and grandfather clauses) were designed in order to prohibit African Americans from voting and existed in the South since the passage of the Fifteenth Amendment to the Constitution in 1870.

These roadblocks were extraordinarily effective in the South.  Prior to the passage of this bill, for example, only seven percent of African Americans had been registered to vote in Mississippi by 1965.[1]  The VRA and its subsequent enforcement enabled the federal government the ability to inhibit discriminatory practices.  Not only did the bill prohibit racial discrimination, but it also required districts with a history of discrimination to seek clearance from the federal government if they sought to make any changes that affected voting procedure.  The bill had been renewed twice, most recently in 2006 (for a span of 25 years).

On February 27, 2013 Shelby County, Alabama petitioned the United States Supreme Court in an attempt to rule a portion of the VRA unconstitutional.  Specifically, they had a problem with Section 4(b) and Section 5 of the bill.  Section 5 identified Shelby County as a district that needed to seek authorization for changing voting laws, while Section 4(b) determined them to be a “covered jurisdiction”[2]  (meaning a place where election law changes had to be run by the federal government because of past discriminatory practices).   In their oral argument, Shelby County’s attorney argued that “The South had changed” and that conditions in the South no longer “justified the extraordinary federalism and cost burdens of preclearance.”[3]  Shelby County argued that the VRA exceeded the authority of the federal government when it came to the Fifteenth Amendment.  As voting rules and procedures were previously relegated to the states, they argued that the VRA in turn violated Article 4 of the Constitution and the Tenth Amendment.

In a 5-4 decision on June 25, 2013, the Supreme Court determined that Section 5 and Section 4(b) of the Voting Rights Act were unconstitutional.  In the Majority Opinion, Chief Justice John Roberts held that the act “imposes current burdens that are no longer responsive to the current conditions in the voting districts in question”[4] (those that previously required pre-clearance).  Roberts conceded that targeting specific states and districts made sense in the past, but felt that this power was no longer needed to prevent discrimination.

Is voter discrimination really dead? While blatant attempts to restrict African Americans from voting seemed to have vanished, many feel that the door has been opened for states to openly restrict voting by certain types of citizens.  After the Shelby County decision, Texas put into place a Voter ID law (referred to as SB 14) that was previously ruled unconstitutional by a lower court based on Voting Rights Act.  Identified as a way to prevent voter fraud, Texas officials instituted a law requiring certain forms of identification to vote. In fact, Texas SB 14 was previously struck down by a United States District Court based on it’s “strict, unforgiving burdens on the poor” as it would require the poor (who are disproportionately minorities in Texas) to purchase a verified birth certificate or other documentation as well as travel to a Texas Department of Public Safety office, which could be 250 miles away – something that might be very difficult to do for the working poor.[5]  However, the Supreme Court’s recent ruling identifying sections of the VRA unconstitutional cleared any legal road blocks in their way.

Texas is not alone in making changes to their voting procedures. In North Carolina (a state previously watched by the provisions of the VRA) the alleged gerrymandering of districts (redrawing district borders for political gain) to minimize African American representation along with a new Voter ID law are controversial.  However, with key provisions of the VRA struck down, it will be difficult for opponents to challenge the laws in federal court.  In addition, it has become quite common in recent years for states to enact laws requiring the showing of identification prior to voting[6].  While supporters of these laws claim that they are seeking to minimize fraud, opponents claim voter fraud is practically non-existent[7] and that these efforts are really aimed at disenfranchising the poor (particularly minorities).

In the Dissenting opinion in the Shelby County decision, Ruth Bader Ginsburg wrote:

The 2006 reauthorization makes abundantly clear, second-generation barriers to minority voting rights have emerged in the covered jurisdictions as attempted substitutes for the first-generation barriers that originally triggered preclearance… the sad irony of today’s decision lies in its utter failure to grasp why the VRA has proven effective.[8]

Joined by Justices Breyer, Sotomayor, and Kagan in dissent, Ginsburg questioned if the court was merely opening the door for new cases of voter discrimination to take place.  While the court’s ruling allowed for Congress to enact future laws that prevent further discrimination, it is unlikely that any such law would pass through Congress in the current political state.  The opinion only stated that previous methods and rules of the VRA were outdated as they were written almost 50 years ago, recognizing that many states and localities (not just those in the South) might need federal intervetion. Ginsburg pessimistically predicted that the past may become the future – that new discriminatory laws will pop up throughout the United States and that the federal government will be left without recourse.

In a column for The Brookings Institution, Thomas E. Mann and Raffaela L Wakeman wrote:

There is much to be said for a new voting rights law, one that uses contemporary evidence of discrimination and focuses on more recent problems facing minorities and other citizens in exercising their franchise, including hurdles to registration, voter identification requirements, and polling place locations, hours and resources.[9]

While these concerns have been identified by many in the media, little urgency has been seen by Congress to ensure that future discrimination does not occur.  Many feel that discrimination is essentially a dead issue – an ugly chapter in our past that we have left in the past with slavery.  However, others point to the issues mentioned by Mann and Wakeman as evidence that voting discrimination is alive and well. With the courts ruling in regard to Shelby County v. Holder, what occurs in the future in regards to voter discrimination and the ability of the federal government to prevent it remains to be seen.

[6] A complete list of states with voter identification laws are available here: http://www.ncsl.org/legislatures-elections/elections/voter-id.aspx.

One thought on “Voter Discrimination and the Shelby County v. Holder Decision”